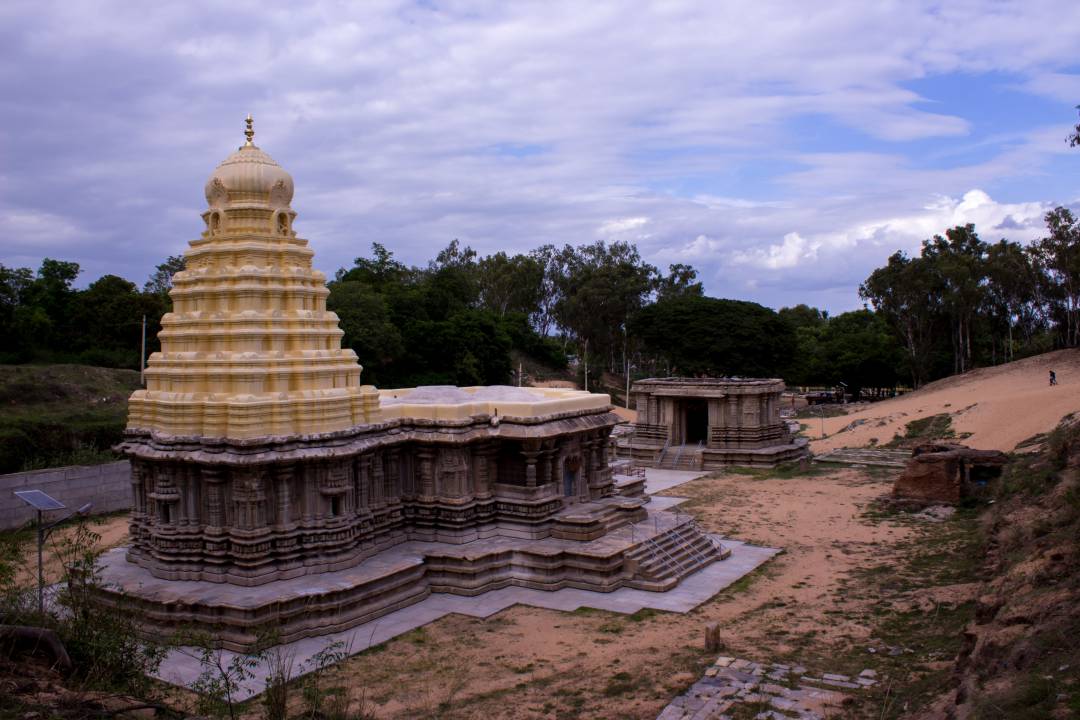 Talakadu also Known as 'Talakad' is on the banks of the river Cauvery. Talakadu is situated 24 Kms from Somnathpur, 32 Kms from Sivanasamudram 45 km from Mysore and 185 km from Bangalore. on the bank of the Kaveri River. The name ‘Talakadu’ was given after two hunters, ‘Tala’ and ‘Kada’, who attained enlightenment by worshipping ‘Vaidyanatheswara’ and the place came to be called after them. The place was also known as Gajaranyakshetra. The place is also known for the sand dunes which gives the town a desert-like appearance that has buried most of the ancient monuments in the sand.

Talakad TempleIt is a historically important place, as it was the capital of the Gangas for a long time. The Cholas called the place Rajarajapura as it fell into the hands of the Cholas from the Gangas and later when the Hoysalas conquered it. Hoysala king Vishnuvardhana assumed the title ‘Talakadugonda’. After the 12th century, Vijayanagar Kings and the Maharajas of Mysore patronized this place.

A historic site, Talakadu as a number of temples that are buried under the sand dunes. The most imposing temples here are Viadyeshvara, Pataleshvara, Maruleshvara, Kritinarayana, Gourishankara and the Anandeshvara. The Pataleshwara Shivalingam is said to change colors during the day (red in the morning, black in the afternoon and white in the evening). The Kirtinarayana temple (an incarnation of Lord Vishnu) is known to have been built by the Hoysala King Vishnuvardhana to commemorate his victory over the Cholas in 1117 A.D. The deity is 8 ft. in height flanked by Sridevi and Bhudevi.

The temples buried in the sand are opened up for ceremonial worship on the occasion when there will be five Mondays in the month of Karthika and a large number of devotees visit the place to have Pancha linga darshan. It comes once in 12 years, for the first time in this millennium it had come in just three years 2006 and 2009. The Vaidyeswara, the Arkeshvara, the Pataleshvara, and the Maruleshvara temples and the Mallikarjuna at Mudukuthore are together called as Panchalingas. It is believed that around 30 temples are still buried under the sand depicting an architectural stamp left behind by every dynasty that ruled Talakadu.

The Curse of Talakadu

Many historians and devotees of Alamelamma believe in the story of greed and desire for power that lead to the infamous curse. In the early 1600s, the then Ruler of Srirangapatnam was Sri Ranga Raya, an heir of the Vijaynagar family. He in the throes of an incurable disease undertook a pilgrimage to Talakadu in the hopes of being cured of his affliction. In order to make the journey, he handed over the reins of his kingdom to his wife, Rangamma. When she heard that her husband was on his deathbed and would possibly never make the journey back to his capital, she decided to go visit him before he passed away. In order for her to make the trip, she handed the kingdom over to the Mysore Maharaja, Raja Wodeyar. The next part is often lost in translation or is mistranslated. The general idea, however, is the Wodeyar coveted the jewels that rightly belonged to the Queen Rangamma.

When the Mysore king sent troops to recover the jewels, the Queen in distress threw herself into the waters of River Cauvery and uttered the curse, “Let Talakadu become sand, Let Malangi become a whirlpool; Let the Mysore Rajas fail to beget heirs.” The curse cannot be logically proven or disproven, but the fact that Talakadu is a sandy desert like the area is indisputable.

Panchalinga temples of Talakad It covers the five temples Kshethra Sri Vaideshwara, Sri Pathaleshwara, Sri Maruleshwara, Sri Arakeshwara and Sri Mudukuthore Mallikarjuneshwara (Panchalinga) are worshipped during a festival called the Panchalinga Darshana, which attracts tens of thousands of pilgrims from throughout India. Indeed, the Arkesvara, Patalessvara, and Maralesvara actually have to be excavated from the dunes especially for the occasion, only to be quickly reclaimed by the sands once it is over.

The timing of the festival is calculated according to a complex astronomical formula with stipulates that it must take place not just on a new moon day of the Karthika (eighth) month of the Hindu lunar calendar (this normally corresponds to November in the solar calendar), but also on a Monday and when the sun is in Scorpio. This means that the Panchalinga Darshana can occur at various intervals, though generally there is a gap of around twelve years between each one. The most recent festival was held in November 2009. The next one is scheduled to take place in 2018.

According to the tradition, pilgrims first bathe in the Gokarnatirtha Lake (where the elephants used to swim) and then make their devotions to the main deity at the Vaideyswara after worshipping at the Chamundeshwari Temple. The pilgrims then go on to the other four Panchalinga temples, stopping off to bathe in stretches of the Cauvery River before praying inside each shrine and returning to the Vaideyswara before visiting the next one. Finally, the pilgrims conclude their devotions at the Kirthi Narayana Temple.

Pilgrims have to complete the ritual in a single day and cover a distance of over 25km barefoot in what must be an exhausting trek. They believe that it will help them attain prosperity and peace.

Explore nearby Attractions around talakadu