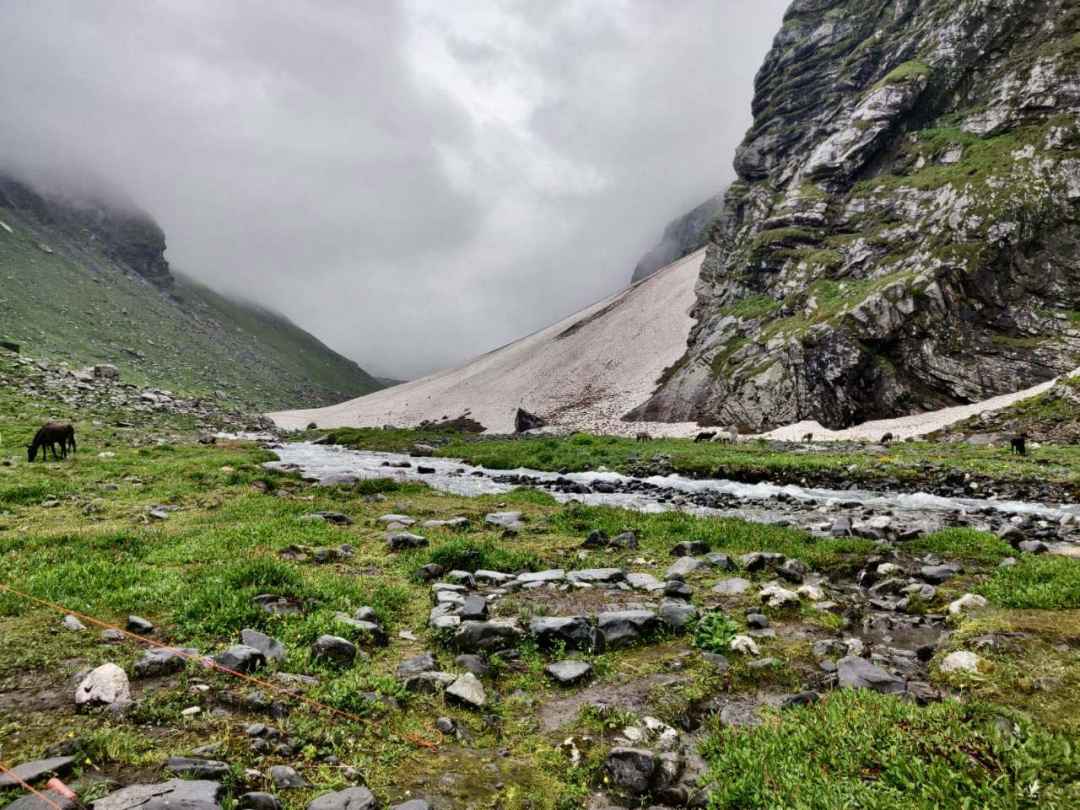 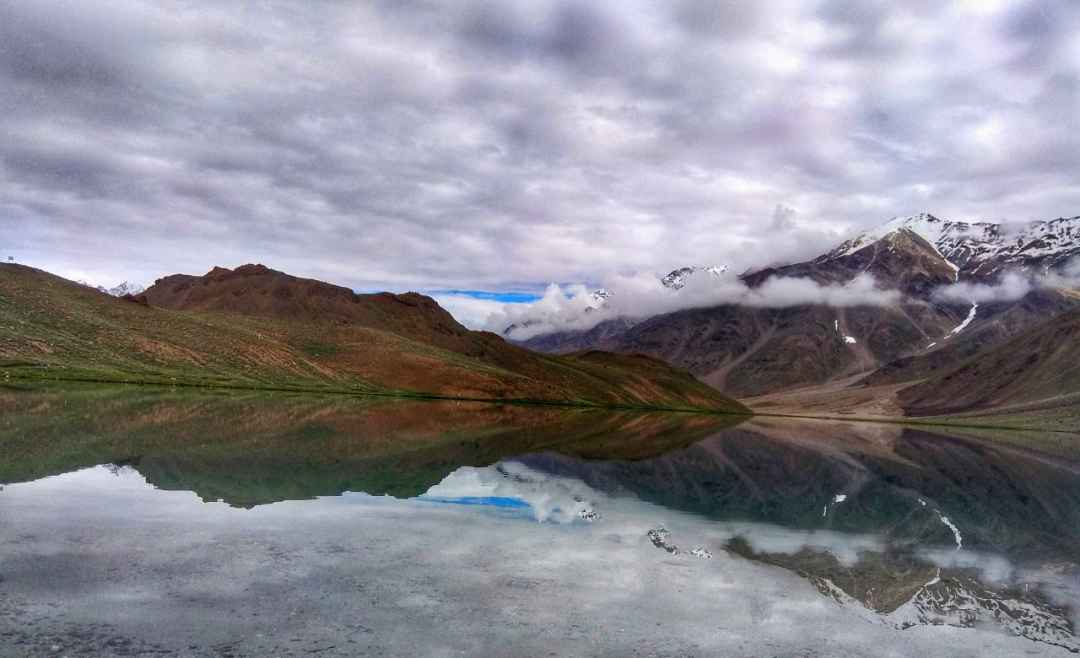 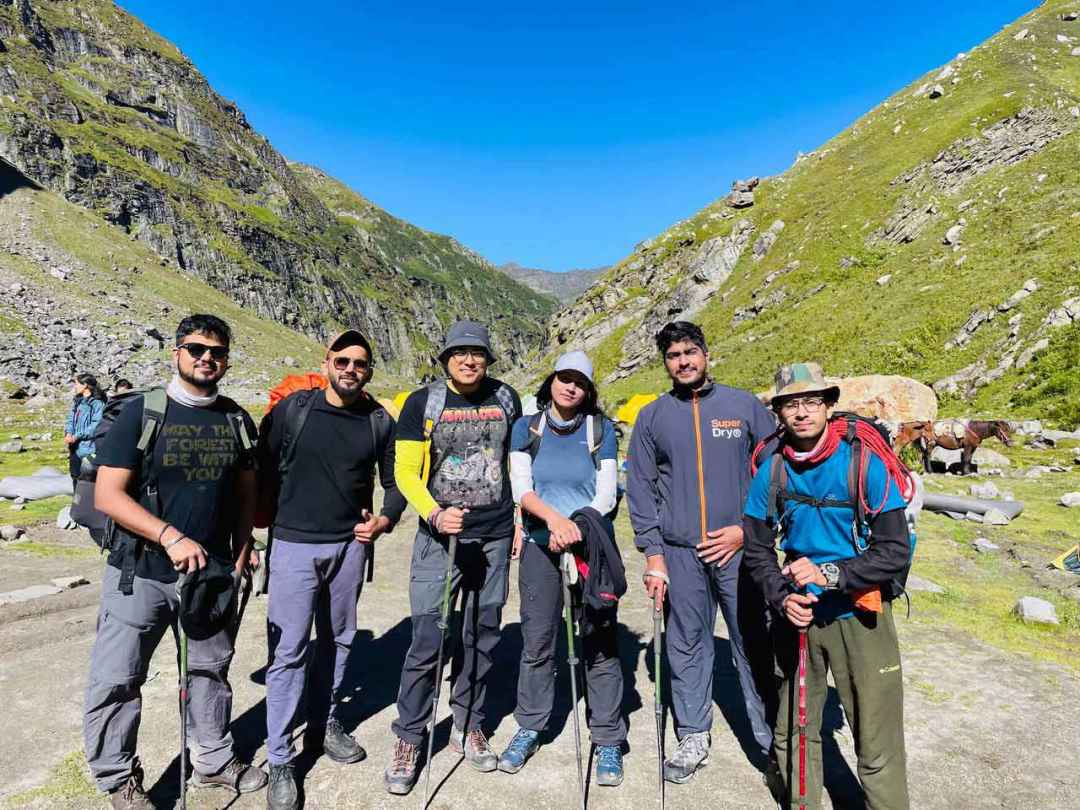 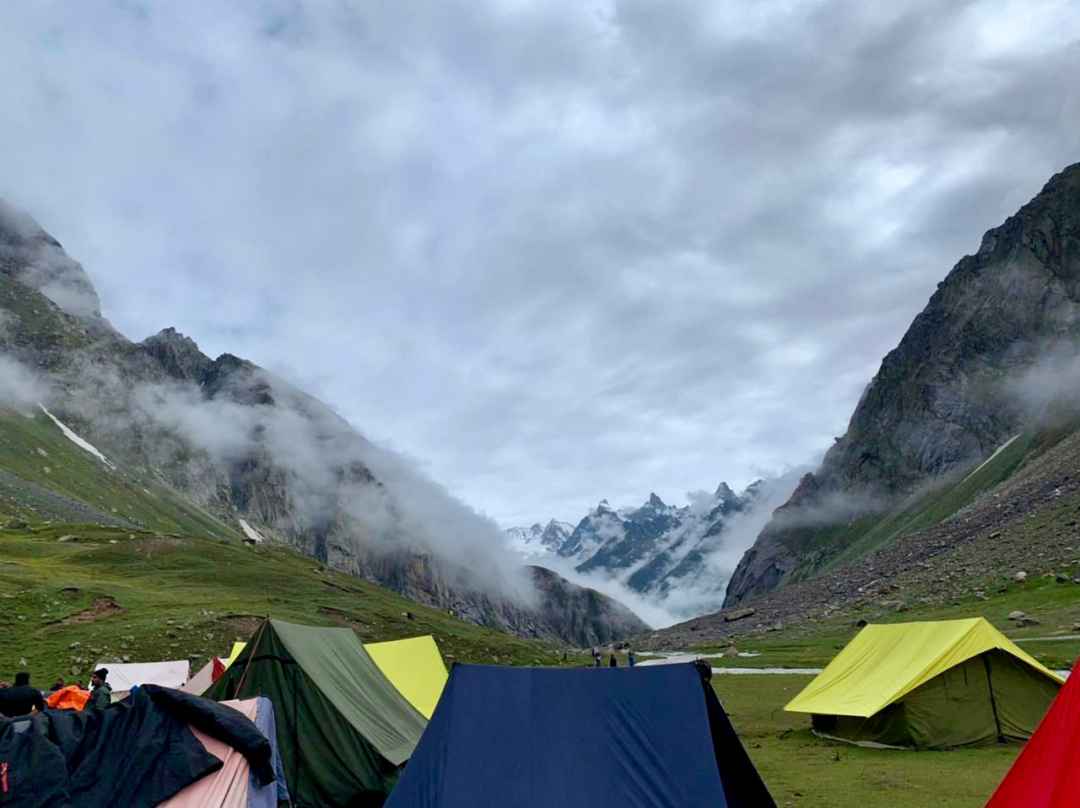 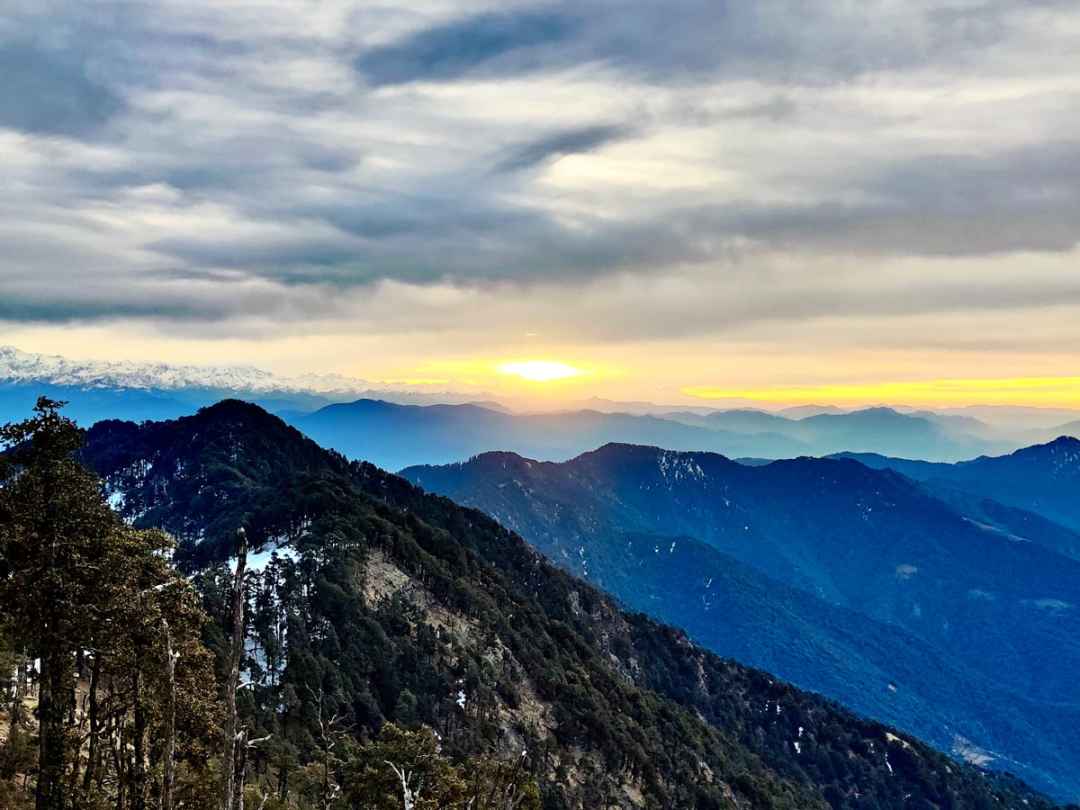 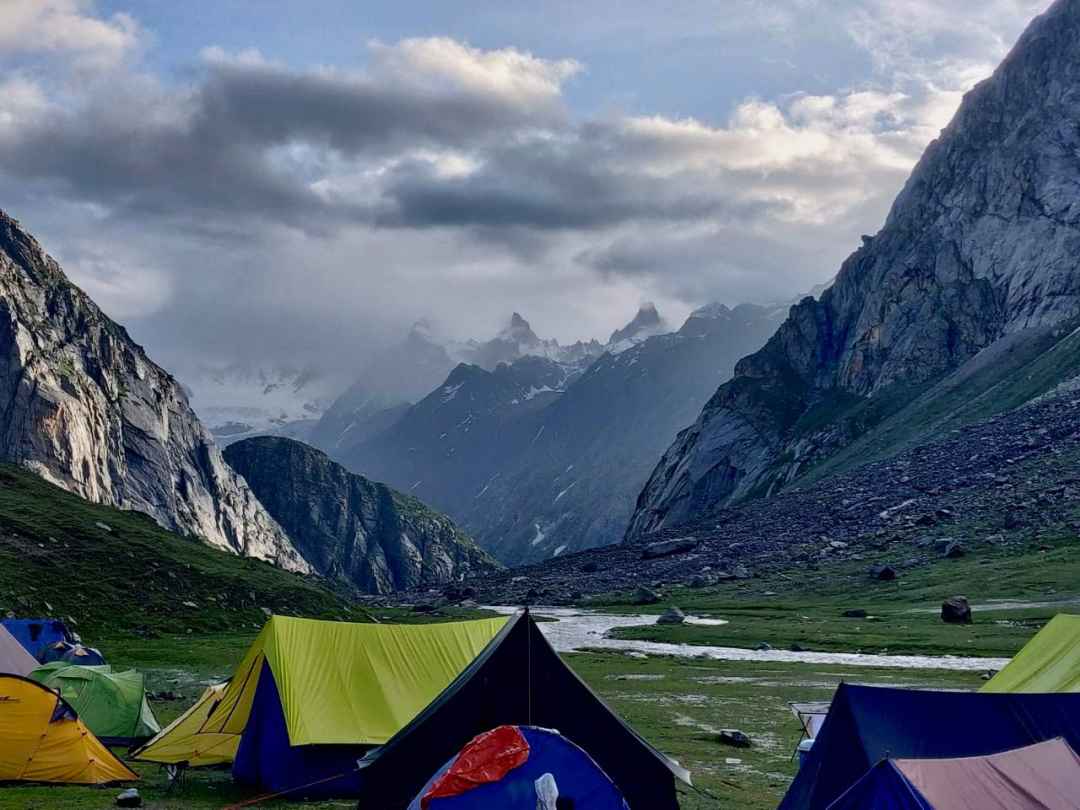 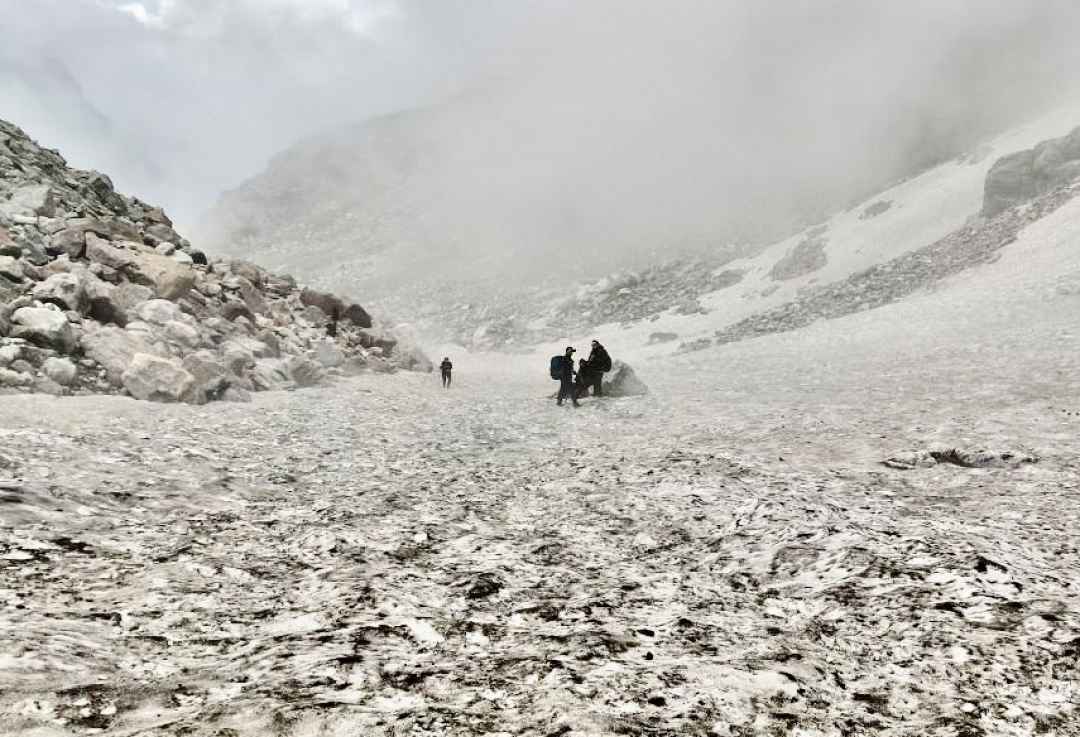 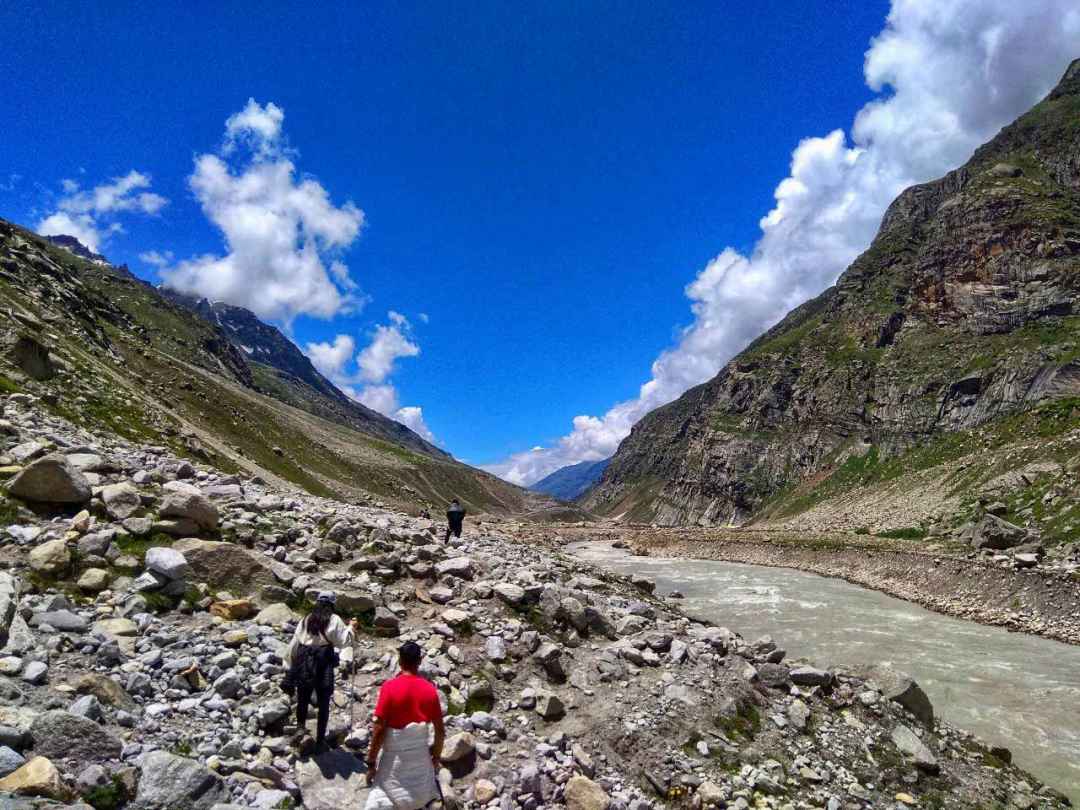 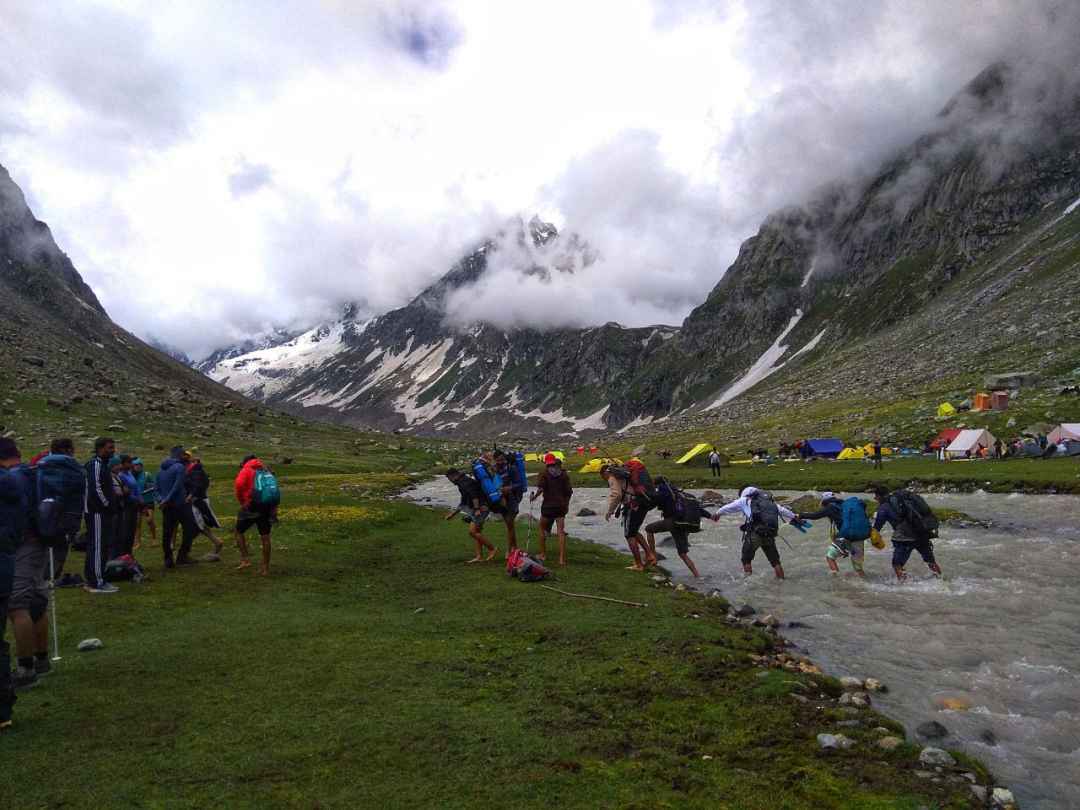 Hamta Pass is a corridor in the Himalayas, between the Chandra Valley in Lahaul and the Kullu valley of Himachal Pradesh, India. The pass is named after Hamta Village, below Sethan village. Lower Himalayan shepherds use the pass in summer for its high-altitude grasslands in the summer, when the desert of Lahaul is barren. The pass includes vertical rock walls, waterfalls, hanging glaciers, pinewoods, rhododendron forests, open meadows, and small lakes, as well as 6000-meter tall peaks. The trek also includes glaciers and fast-flowing rivers, making it challenging but doable for some beginners.

Hampta Pass is a moderate-level trek and is preferred by both beginners as well as experienced trekkers. The maximum altitude attained gained during the Hampta pass trek is 4,200 m.

Hampta Pass is a Monsoon Trek and is best done between mid-June to mid-October. There are chances to witness snow on the high passes in the early days of the season and then it melts down completely by August.

The temperature in Hampta Pass Trek daytime is pleasant between 10 to 15 degrees and at night it goes down up to -5 degrees.

Total Hampta Pass trek duration is 5 days including a road journey from Manali.

Meals on the Trek:

Meals start from day 1 dinner to day 5 breakfast. On Day 5 early departure after breakfast. During the trek, you will be provided healthy hot meals which include breakfast, lunch, evening tea and snacks, hot soup, and dinner with daily different desserts. Hot drinking water will be provided daily at the campsite.

How to Reach Manali from Delhi:

The best way to reach Hampta Pass from Delhi is via Manali. Reaching from New Delhi to Manali is probably the easiest part of the whole trip. The distance between Delhi and Manali is around 550 kilometres.

There is no direct train to Manali. From Delhi, you can either take a Shatabdi train to Chandigarh or a train to Pathankot and then hire a cab or take a bus to Manali.

Fly to Bhuntar. Located 52 kilometers away from Manali, it is the nearest airport to Manali. There are many private and Indian Airlines flights to Bhuntar that operate regularly. From Bhuntar, you can either take a cab or a direct bus to Manali.

Note* If you don't want to carry your backpack 🎒 you can give it to porter/Mules🐴, but you have to inform us in advance and have to pay Rs. /- extra per bag for the whole trek.

Things to Know Before You Go on the Trek

● Pay attention to the trek guides and instructors in order to enjoy a safe and sound trek.

● One must not expect luxuries. Electricity may be available only at Joshimath.

● The Vasuki Tal trek takes place through an eco-friendly zone; do not encourage littering of the local sites or campsites. Travelers littering may be fined.

● The management reserves all the right to modify the Vasuki Tal trek during any emergencies or natural calamities.

● It is recommended to carry enough warm clothes and the right kind of trekking shoes for the trek.

The key to staying comfortable while on an active trip is layering. To get maximum comfort with minimum weight, you need versatile layers that mix and match to create the right amount of insulation, ventilation and weather protection. This gear list has been created to help you choose the proper equipment. Try to bring only what is necessary; this will help you and the field staff.

We have a fixed departure point from Nehru Park at the upper end of Mall Road, near Manali Govt Bus station.

What is the Hampta Pass Trek Distance?

The average walking distance is 7- 8 km each day and trekkers complete it in 5-7 hrs. The total trek distance is approx. 28 km. Please refer to the Detailed Hampta Pass itinerary for more details.

What kind of food is provided on the Hampta Pass trek?

Vegetarian food will be served throughout the trek. Breakfast varies from bread and butter, semia, poha, cornflakes, etc. Lunch mainly comprises of roti or puri with sabzi. Dinner is complete with Dal, rice, roti, and dessert. A dry ration of biscuits and toffees will be provided as well. You may carry nuts and dry fruits if necessary.

Will there be water sources on the Hampta Pass Trek? How much water should I carry while trekking?

Our campsites are pitched near water sources. For your day’s trek, two liters of water should be enough. On Day 2 and Day 5, you will find one water source to refill your water bottles. Your trek leader will brief you about these before starting the day’s trek.

What is the washroom/toilet facilities like on the Hampta Pass trek?

During the Hampta Pass trek, toilet tents will be set up along each campsite. A toilet tent will have a deep pit, where one can answer nature’s call. There will be a mound of soil and a shovel to cover it up. These are dry toilets, where you’ll have to use toilet paper. This is the most hygienic and convenient way to answer nature’s call in the wild. Please use plain toilet paper and refrain from using wet wipes since these are not biodegradable.

When it gets really cold can I consume alcohol?

Alcohol is dangerous in extreme cold, especially at high altitudes. Contrary to what people believe, alcohol does not make you warmer. Instead, it opens your pores, making your body colder. Moreover, it dehydrates you very quickly. Hence consumption of alcohol is absolutely prohibited on all Nomad Adventures treks. Anyone found with alcohol is quickly removed from the trek. Smoking, similarly, is not allowed on Nomad Adventures treks.

Do I need special snow shoes on this trek?

You don’t need special snowshoes. A good waterproof trekking shoe is sufficient for the trek. When there is snow, we provide micro spikes and gaiters.

Why is the trekking pole necessary?

A trekking pole gives you stability and balance and helps reduce fatigue.

Can I take my child along on this trek?

Yes, as Hampta Pass is an easy to moderate trek, and children between 6-and 8 years and physically fit can do this trek easily.

What kind of vehicle will be there?

Tata Sumo/ Bolero/Max kind of vehicles we arrange and accommodate 6-7 People in a vehicle. For more than 8 we arrange tempo travelers.

Who will be there with us on the trek from Nomad Adventures?

Nomad Adventures team consisting of a qualified Trek leader, trek guides, porters, and cooks will be with you throughout the trek.