The Vishwa Shanti Ashram is located around 25 km from Bangalore on Tumkur Road near Nelamangala Town. It is a well-kept secret as far as tourists are concerned. Vishwa Shanthi Ashram was established by Sant Sadguru Keshavdas in 1982, with the objective of promoting world peace and also to spread the teachings of the Gita and Bhakti Yoga. The ashram is spread over fifteen acres The Ashram is well landscaped and cleanly maintained. You can also find the tallest statue of Vijaya Vittala (36 feet), an incarnation of Lord Vishnu and also Gayathri Devi. Another attraction here is the Bhagavad Gita Mandir, where all the verses of Bhagavad Gita are carved on the walls. In front of this Mandir is a beautifully sculpted form of the chariot driven by Lord Krishna. There are numerous other shrines dedicated to other Gods and Goddesses within the campus. During festivals, it serves free food and Prasadams to numerous devotees that come to this spiritual destination.

At the entrance of the Ashram stands the huge statue of Vijaya Vittala, which is about 36ft tall. On the right side of the statue is the temple for Santhoshi Matha. One can see a well-designed pot of Tulsi plant over there. On the other side, we can see the temples for Goddess Ashtalakshmi, Goddess Gayatri Devi, (posture of Goddess Durga sitting on a Lion), and navagraha temple.   There is a gallery where we can see the statues of seven women depicting seven rivers - Ganga, Yamuna, Godavari, Saraswati, Narmada, Sindhu, and Cauvery, flowing from the mountain.  On the left-hand side is the Bhagavad Gita Mandir, we can see the Gitopadesha Chariot, Lord Krishna advising Arjuna on the chariot during the Kurukshetra battle. Once we enter through the chariot, we can see a huge statue of Lord Vishnu with all 10 incarnations (Macha Avatar, Koorma Avatar, Varaha Avatar, Narasimha Avatar, Vamana Avatar, Parasurama Avatar, Rama Avatar, Krishna Avatar, Balarama Avatar, and Kalki Avatar). It is the Vishwaroopa revealed to Arjuna by Lord Krishna. The chariot’s outside and inside walls are made up of granite stones that have inscriptions of around 800 verses of the spiritual Bhagavad Gita in English, Sanskrit, Kannada, and Hindi. There is a Devi temple below, where we can also perform pujas to the idol. There is also a children's park with all entertainment equipment, which is operated manually for the benefit of the kids.

You will find 10 incarnations in the ashram:

* Visiting fee of the Ashram is 12 Rs. You need to pay 2 Rs at the entrance for leaving your shoes. 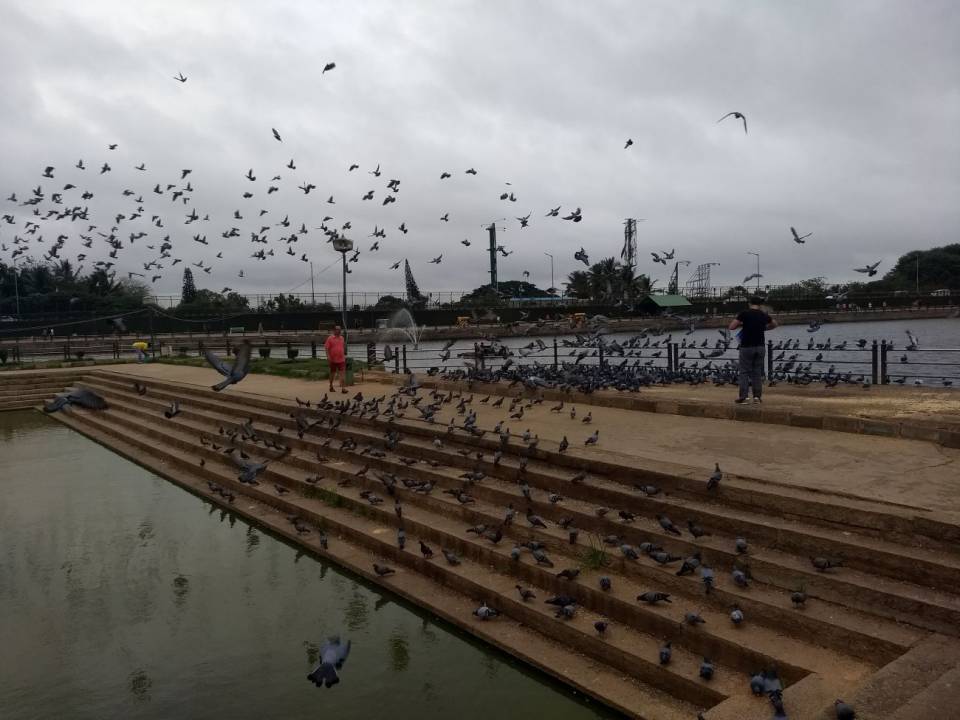