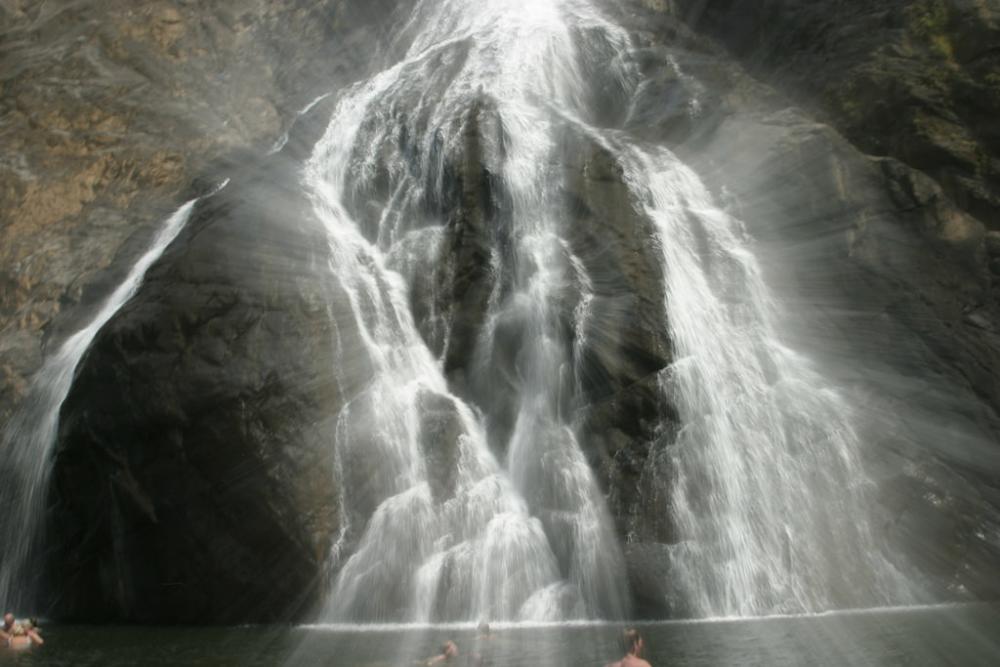 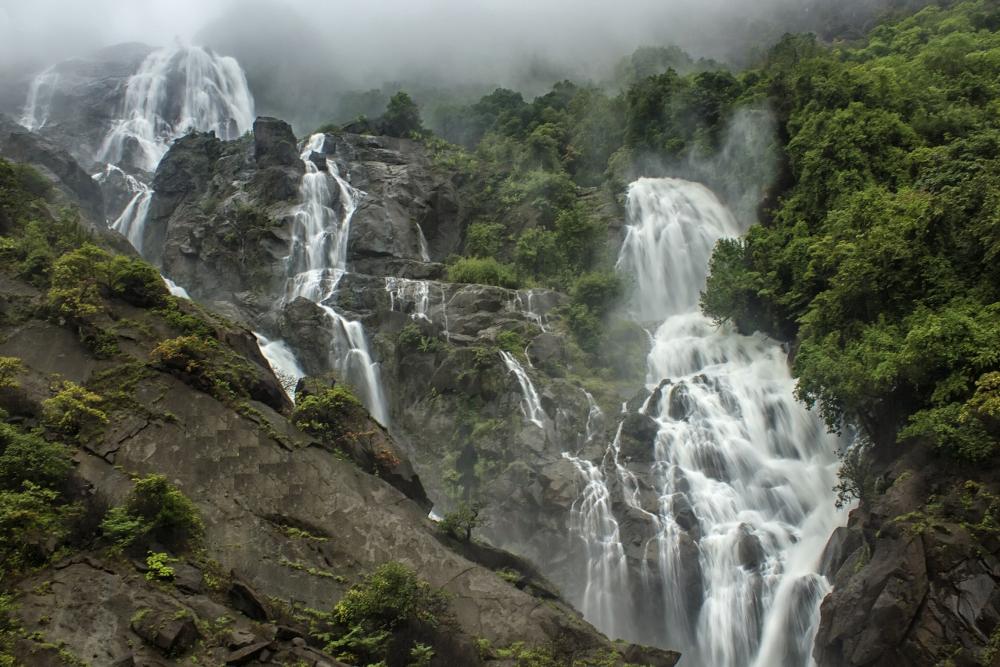 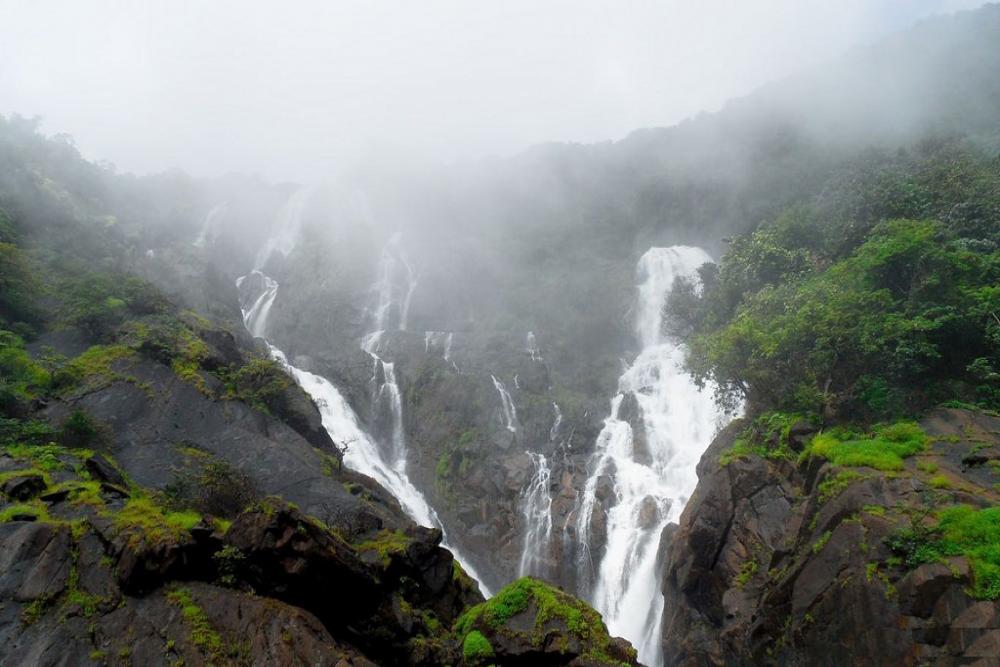 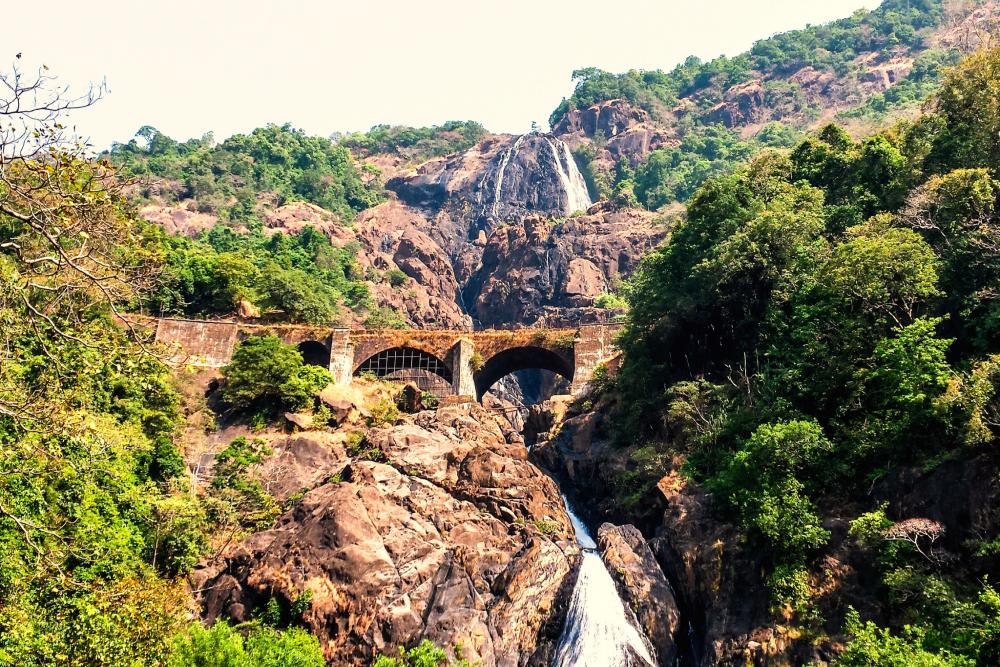 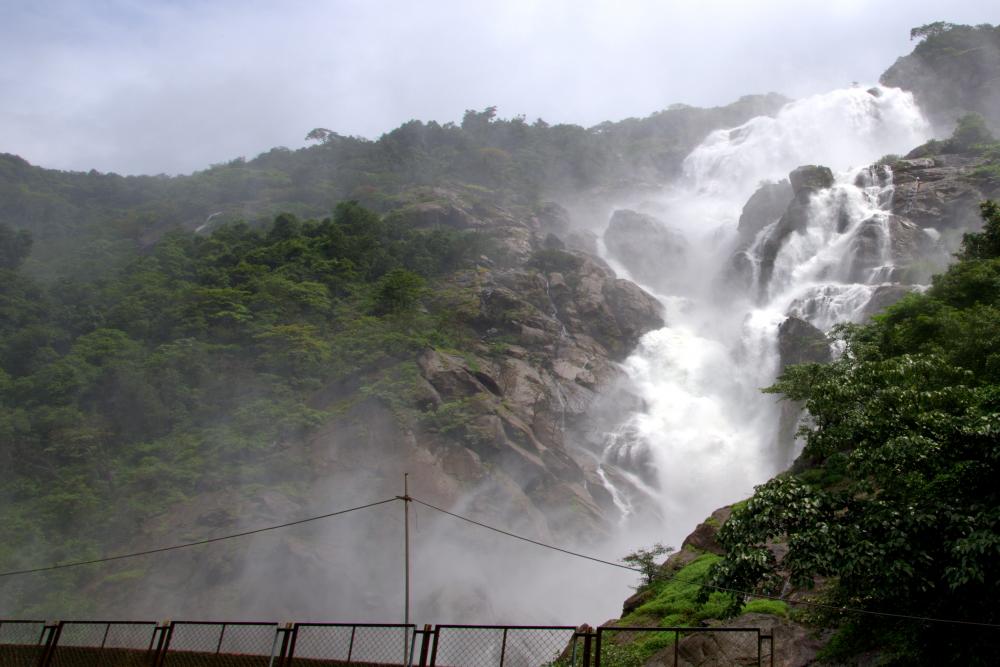 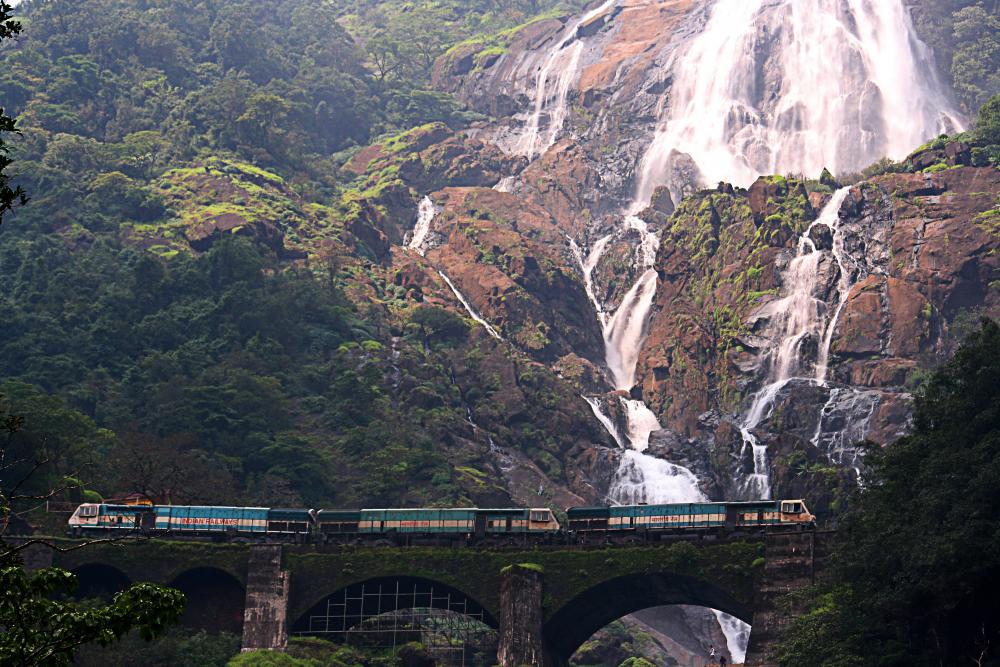 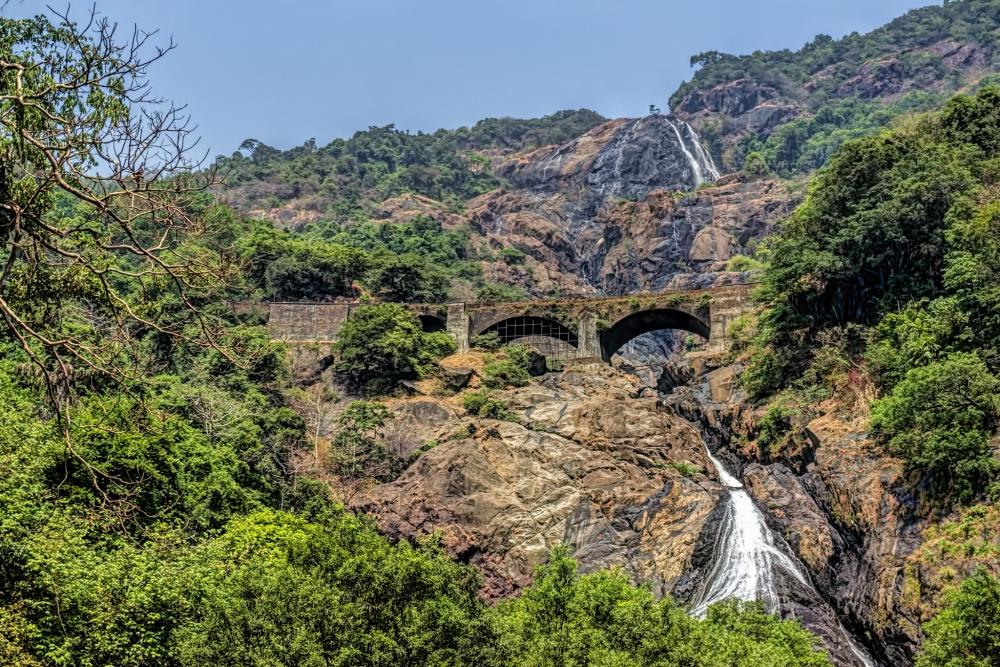 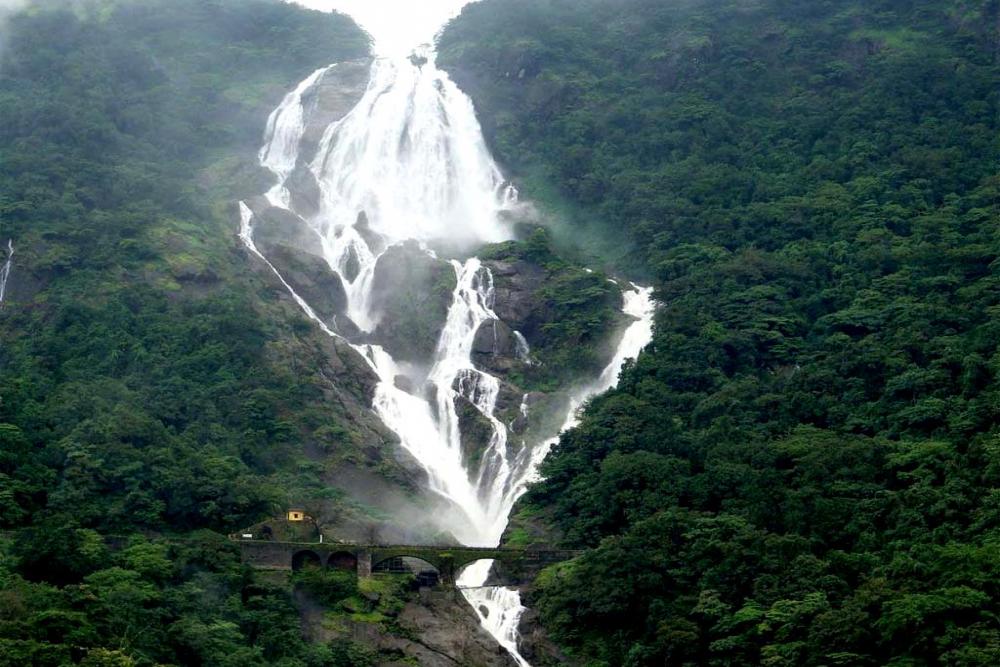 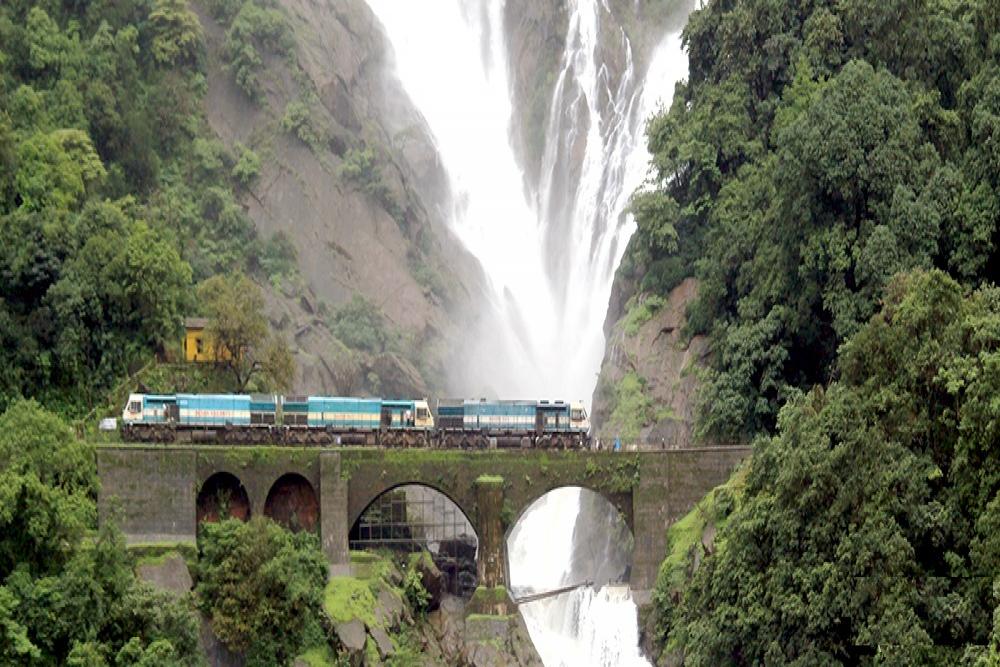 Dudhsagar is one of the worlds most magnetic falls literally "ocean of milk" (As the cascading waters appear white like milk, the waterfall is called Dudhsagar, Doodh being the Hindi word for milk.).The lovely cascade with its creamy white water offers a breathtaking view and it is this white water that earned the name Dudhsagar.  it is a four-tiered waterfall located in the Bhagwan Mahaveer Sanctuary and Mollem National Park amongst the Western Ghats on the Mandovi River in the Indian state of Goa. It is 60 km from Panaji by road and is located on the Madgaon-Belgaum rail route about 46 km east of Madgaon and 80 km south of Belgaum. Dudhsagar Falls Said to be the sixth tallest waterfalls in the India, it drops from a height of 310 m(1017 feet) and an average width of 30 meters (100 feet).  This is one of Goa’s most attractive and ideal picnic spots mainly offering charismatic natural beauty and amazing scenery when in full flow after the monsoons. these magnificent falls are found in a blissful tropical jungle with crisscrossing streams. The view from the peak of the falls is breathtaking. The falls look even better at magical light of dawn. For tourists who love water sports, swimming is a good option at the base of the falls only when the water is calm. The sure-footed adventurers could try and ascend up to the head of the falls through bushes, boulders, and water. It's a strong ascend which takes nearly two hours. The surrounding area around the waterfalls is a picnic spot and one can spend the entire day in the vicinity of the Dudhsagar waterfalls.

The legend tells the story of this powerful and wealthy king who ruled a kingdom in the Western Ghats. His lavish and opulent palace in the hills was surrounded by vast gardens which were full of deers and gazelles. The King had a beautiful daughter, who is a beautiful princess lived in a palace in a forest close to the falls. She loved and enjoyed bathing in the lake nearby and used to drink 'sweetened milk' from her 'golden jug' after her bath. One day while enjoying her jug of milk she found herself being watched by a prince, who was standing amongst the trees. Immediately, she poured the jug of milk to form an improvised curtain to hide her naked body from the glances of the stranger. Suddenly, the milk poured by the princess cascaded down the mountain and thus Dudhsagar waterfall formed.

how to reach: A number of private operators offer special trips to the Waterfalls and the tours operated by GTDC (Goa Tourism Development Corpn) also have Dudhsagar Waterfalls as one of the tours stops. There is a train from Goa (Margao-Sanvordem-Colem-Dudhsagar) as well as from Karnataka (Londa-Castle Rock-Dudhsagar). One has to get down at Kuhlem (Collem) railway station and walk towards the falls which are about 11 km away. It is a 2–3 hours journey. The complete stretch of the falls can be visible while hiking towards the waterfalls. One can reach the falls by road traveling through forests too, but the journey can be tedious. The road is from Colem that passes through jungles and there are many species of birds, insects, plants, and animals. Only authorized jeeps are allowed anywhere near the falls, but it is nearly impossible to drive on this road during the rainy season.

Dudhsagar can be reached by road  Jeep rides to the Dudhsagar Waterfalls start at Kulem railway station it's in goa (12 km from Dudhsagar Waterfalls),  First station after crossing Karnataka- Goa border where the train stops. The jeep service to the waterfall is operated by the local taxi union. The jeep ride up to the Waterfalls takes about an hour, and then it’s ten minutes walk through dense tropical forest to the base of the waterfall. The jeep ride costs around Rs 450 per person (sharing basis, Charges are fixed so no chances of fraudulence).  or Rs 2400 per jeep. In addition, a compulsory lifejacket needs to be taken along (about Rs 30).  There’s also s nominal entry fees into the sanctuary charged at the forest gate plus a fee for Still camera: 50, Video Camera: 150. This service is usually operational from October to end of May.  as the trek crosses rivers which are not motorable during the rainy season.

1.in peak season, make sure to reach Kulem early as the total number of jeeps permitted to enter the Wildlife Sanctuary is capped.

2. Jeep trail is not open during Monsoon and is either not walkable. If coming by own vehicle, you will have to pay heavy RTO fee at the Goa border.

Explore nearby Attractions around Dudhsagar Falls