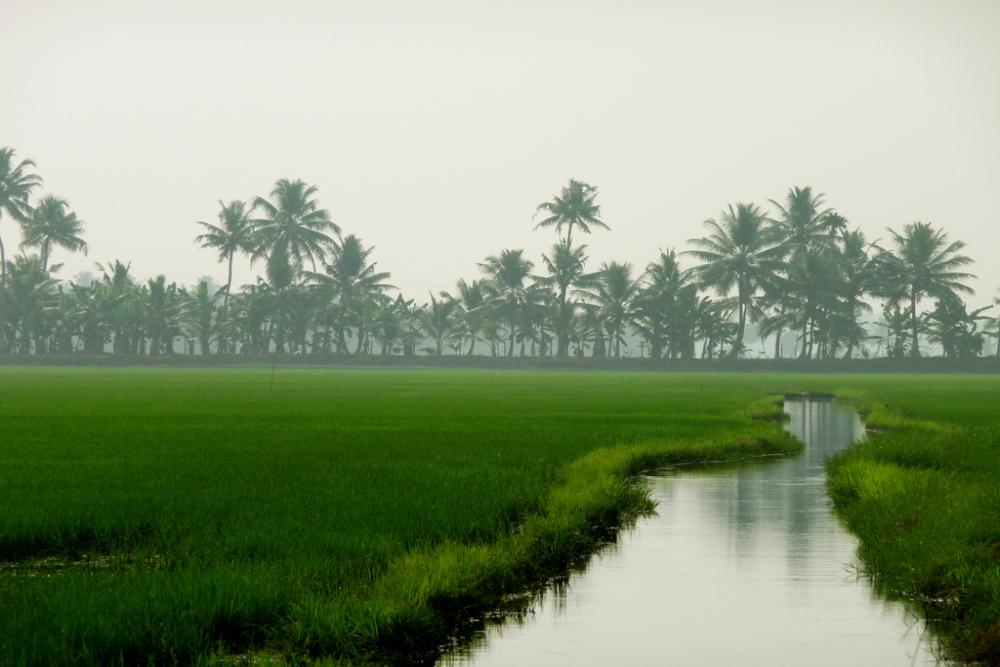 The Kuttanad region in Alappuzha district is named the "rice bowl of Kerala" for its picturesque expanse of paddy cultivation which forms Kuttanad-Alappuzha-Kerala the main source of the famous ‘boiled rice’ of the state. located about 30km from the heart of Alappuzha, Kuttanad stretches for 75km from Kollam in the south to Kochi in the north, sandwiched between the sea and the hills.  it holds some geographical peculiarities. It is a vast area of partly reclaimed land, covered with the bright green paddy fields, separated by dikes. The unique feature about paddy cultivation in Kuttanad is that the level of water is a few feet higher than the level of the surrounding land. It's the area with the lowest altitude in India and one of the few places in the world where farming is carried out below sea level. The place is an amazing labyrinth of shimmering waterways composed of lakes, canals, rivers, and rivulets. Lined with dense tropical greenery, it offers a glimpse into the rural lifestyles of Kerala. Kuttanad is a backwater paradise and an ideal destination for a backwater cruise in Kuttanad-Alappuzha-KeralaKerala. It is possible to drift along in a houseboat and enjoy the scenic view of the Kerala countryside. With the Kuttanad region and the Vembanad Kayal nearby, Alappuzha attracts tourists throughout the year.

The criss-crossing canals in the area evoke comparisons with Venice, but the differences are also substantial. Each has an identity of its own. Amongst the notable sights is the palm-covered Pathiramanal Island in Vembanad Kayal, which can be accessed through an hour’s cruise by boat from Alappuzha. The district is famous for its snake boat races and also houses a number of historic colonial buildings and a beach.  The most popular route taken to get close and explore Kuttanad is the Alappuzha-Changanasserry road. This road goes through the heart of Kuttanad and gives visitors plenty of options to watch the day-to-day life at Kuttanad. The best thing for a visitor to Kuttanad is that one can take deviations from either side of the Alappuzha-Chanaganasserry road to reach villages, predominantly consisting of farmers. During the harvest season the vast expanse of paddy fields, at some places dotted with islets of coconut trees, will be busy with farmers engrossed in different farming activities; done in the traditional manner. Quite early in the morning itself, one can sight the women folk heading towards the paddy fields carrying their lunch box and sickle, and on the other hand, men could be seen already on the fields till the land, sowing the seeds, getting rid of weeds, diverting water channels, etc.

Explore nearby Attractions around Kuttanad